Lizards in the City Park

We had an extra day in Bangkok and we decided to check out more of the city.  What we should have done was just leave a day earlier for Cambodia.  As it turned out, the rest of our time in Bangkok ended up being mostly a series of calamities.  Right from the start we should have known what kind of day it was going to be when we had to wait forever at Starbucks.  After that we walked to Limphini Park where we discovered it was being completely washed down and the lawns were being watered (making it virtually unusable).  Hardly any one was there (which was actually really nice), but all the park benches were wet.  It’s a very nice park with some great views of city, but we couldn’t sit down and enjoy it.  The highlight was when a 4 foot long lizard came out of the pond and stood just a couple feet from Robert.  Robert had no idea it was there since he was totally focused on taking photos.  When he finally did notice the lizard, he jumped 3 feet high and probably almost had a heart attack.  I got a good laugh and he managed to get some good pictures of him. 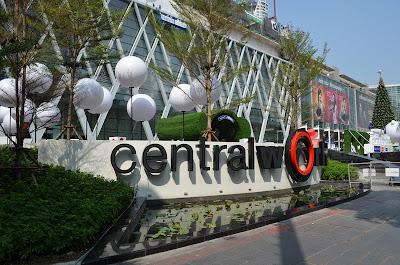 In the park we were also warned by an off duty officer that we should be careful walking around the city since they had recently released a lot of prisoners (due to the recent flooding).  He mentioned that they were targeting tourists.  That was a comforting thought so off we went to the Siam Shopping District.  This area was as modern and cosmopolitan as it gets.  It ranks right up there with Hong Kong and Singapore in terms of the number of “name dropping” stores.  There were xray machines and security guards at every entrance and exit.  The Christmas decorations outside and inside were very typical of western commercialism (and only briefly interesting to look at).  We tried to “shop” at Central World and the MKB (where they charged us to use the restroom), but we couldn’t think of anything we wanted or needed.  I did walk away with a chocolate croissant that was pretty darn good though. 🙂 Overall, I guess we were lucky we didn’t get thrown in jail that day.  Fortunately we spotted the “no photographs” sign before a police officer spotted us taking indoor photos.

Bored with the shops, we took the BTS back to the river and boarded the ferry to see about getting some lunch in Chinatown.  That turned out to be an incredibly bad idea.  That place was loaded up with people – packed in there like sardines – and we could only move in the direction of the crowd.  We got out of there as fast as we could (which wasn’t very fast), yet it still took us forever to cross the streets and get back to the ferry terminal.  We were hot, frustrated, and hungry so we went back to our nice cool apartment (which we should have never left) and ate some fruit and watched a movie.  The day ended good though, as we went to the very good Italian restaurant we found the night we arrived.  They had awesome pizza and pasta (and of course, wine). 🙂 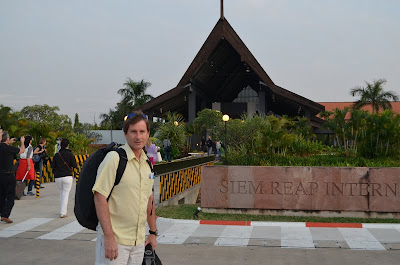 The next day in Bangkok wasn’t much better.  We checked out at 10am and took a taxi back to the airport. The traffic getting to the airport was horrendous and we had to wait in notoriously long lines at check-in, immigration, and security.  Our flight then ended up being delayed several hours ruining our afternoon plans in Siem Reap.  At least we did eventually take off.  We were thankful to finally be out of Bangkok.  Bangkok was better than we anticipated but not somewhere we’d likely return to.

The flight was very short and our approach into Siem Reap was very interesting.  The last 15 out of 20 minutes, all we could see below us was water everywhere – including under all the trees.  I started wondering if there was flooding here or if this place was like a swamp.  It turns out, we were flying over  Tonle Sap lake (which is huge this time of year).  We landed right before sunset – which was beautiful.  I didn’t know this, but Cambodia is incredibly flat – as far as you can see, a hill there is very rare.  And whereas sunsets are beautiful lots of places, I noticed right away there is something mysterious about this place that makes them magical here. 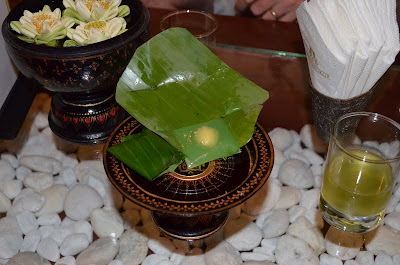 After deplaning, it took us awhile to get through immigration (even with an e-visa), but it ended up being perfect timing since we had to wait for luggage anyway.  A driver from our hotel was there to pick us up and in 15 minutes we were at our hotel.  I’m not exactly sure what they gave us as our welcome snack and drink…there was a green jello/gummy bear thing and a green drink.  Both were very unique tasting (actually indescribable).  Let’s just say they are not destined to be on a top 10 list anytime soon.  When we checked-in they also set up a guide and driver for us for the next day.  Our hotel had a distinct Cambodian style – lots of wood paneling and statues resembling pieces from Angkor Wat.  After a few drinks in the bar and a wonderful buffet dinner we went up to our room to get some much needed rest anticipating the full day ahead of us.

Click the picture below to see some more interesting photos: