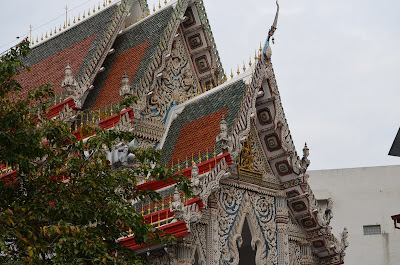 We arrived in Bangkok Friday evening, and settled into our apartment.  It was so nice to have a home-like space for the three days we were in Bangkok.  We loaded up the fridge with some essential snacks and drinks and felt immediately relaxed.  Our apartment building was located on a quiet street walking distance from some great restaurants yet conveniently located to all the major tourist sights.  It was a very nice place and we would definitely stay here again if we ever found ourselves in Bangkok.

On Saturday we did a bike tour of the Siam historic district of Bangkok with Follow Me Bike Tours.  I know it sounds crazy, but it was a lot of fun!  Since it was Saturday morning the traffic probably wasn’t as bad as a weekday.  We also lucked out and got a private tour again (probably because of the decreased number of tourists in the area due to the recent flooding).  We arrived at the clubhouse at 7:45am and met our two guides, Tob and Kathy.  Equipped with 24 gears, heavy duty shocks and ultra cushy seats we set off to tackle the jungle of Bangkok.  We did have to cross or ride on major streets a few times (thus experiencing cars and motorcycles whizzing by and large buses brushing up right beside us), but most of the trip we were on backstreets, narrow alleys, pathways and sidewalks which was actually a lot of fun.  Only someone who was intimately familiar with the area could do this route without any help.  We covered 25 km in 4 hours and got to see many historic sites in Bangkok that most tourists never see (or even know about).  The only bad thing about a bike tour is that it’s hard to take pictures unless you stop.  If you stop too much, you’re not going to get very far.  So some things we only got to see the outside of as we passed by. 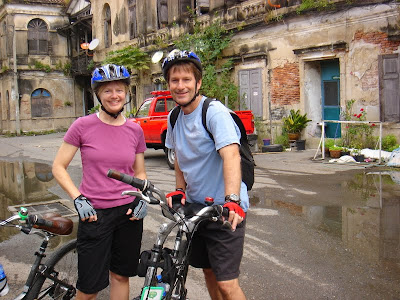 In front of the Old Customs House

Our route followed north along the east bank of the Chao Phraya River.  We passed the Shangra-la Hotel and soon stopped at Wat Suwan Plu.  This temple had it’s own elementary school and we watched as the kids assembled early that morning.   Unlike the other wats we’d see everywhere else, the monk’s quarters were very simple.  They were made of wood boards and had pretty carved wood panels.  The bot (prayer hall) was white with beautiful carvings, statues, and some light blue tiles highlighted by touches of gold.  We continued on our way entering the farang (foreigner’s) quarter of Bangkok.  We passed the Assumption Cathedral, the East Asiatic Company, and the French Embassy before stopping at to the Old Customs House.  Built in the 1880’s, it was obvious that this was once an incredibly beautiful European style building, but now it’s in a very sad state (it’s great to photograph however).  The fire department uses the lot now, and there was still some water in the lot from the recent floods (sandbags were still piled four feet high along the river bank).  We were told there were plans to eventually restore the building to it’s original glory.  We then biked thru was a small Muslim community and past the Portuguese Chancellery (the Portuguese were the first foreigners to have formal ties with Siam), before stopping at the Holy Rosary Church (built by the Portuguese in 1786).  Outside the church was a garden with a little shrine, a Christmas tree, a tree with hanging presents, and a snowman made out of recently used sandbags.  The inside was a beautiful old fashioned church with ceiling fans, stained glass windows, and a gorgeous ceiling. 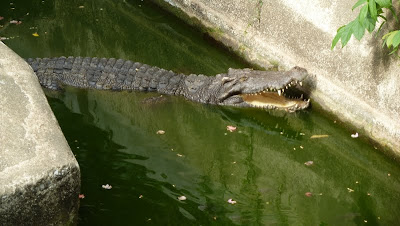 Then we biked through Chinatown.  Thank goodness we were there before the crowds arrived.  Even this early the place was like a beehive and almost impossible to get through at times.  We stopped once to get some pictures of the main walking street.  We followed Tob down all sorts of narrow corridors, past an old Chinese shrine, and we watched everyone frantically preparing for the busy weekend ahead. We stopped at Wat Chakrawat, which is a small temple with a black and gold facade.  Our guides were anxious to show us the most popular residents here – the crocodiles.  We peaked over the wall and sure enough there was one in the pond.  Right around the corner was another caged within a fence sleeping.  They turned on a hose to wake him up and cool him off with some cold water.  In a glass case near the pond, was the skeletal remains (with skin) of the first crocodile they pulled from the river some 50+ years ago.  Plenty of dogs and cats hung out in this area too.  We learned about the guards in front of the wats.  One is male and one female.  The male usually has a ball, and the female has a baby. 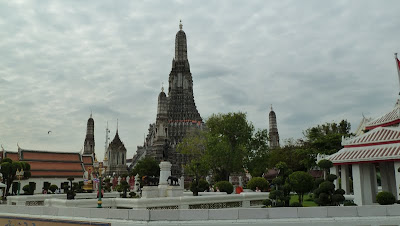 We then made our way back to the river bank and stopped right before we entered Pak Khlong Market – Bangkok’s largest wholesale market.  Most restaurants and local markets come to here to get their goods.  It’s open 24 hours a day and it’s busiest in the morning.  Without stopping, we went through the market which was loaded up with everything you could possibly think of.  The array of smells we passed ranged from amazingly divine to very pungent.  The volumes of food moving through here made Costco look like child’s play.  Trucks were piled high with bananas, cabbage, peppers, onions, garlic, crates of fruit, etc.  There were bins and baskets filled with large industrial size bags of produce as well.  Carts, trolleys, and dollies were moving goods around.  This went on for several city blocks…all sorts of vegetables, fruits, fish, chicken, spices, flowers, and who knows what else.  I knew we’d have to come back here at some point to get some photos.  We stopped at a ferry dock right across from Wat Arun (Temple of the Dawn).  Wat Arun is a stunning structure – even from far away and especially on a cloudy day.  We boarded the ferry and headed to the other side. 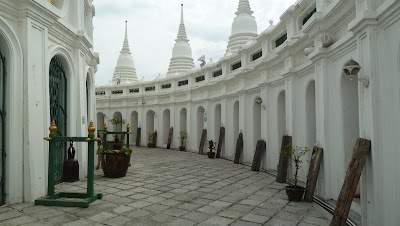 After we docked, we explored the temple grounds. We didn’t go into the Wat since we could easily admire it’s porcelain covered exterior from where we were.  We walked to the river bank and saw the official name of Bangkok.  Kathy read it out loud to us.  It’s in the world record book for the longest name of a place…translating to something like: “the city of angels, the great city, home of the emerald Buddha, built by…etc”. We biked south along a boardwalk paralleling the west bank of the river and stopped at the very old Chinese shrine, Kuan Yin, dedicated to the god of mercy.  Looking like it’s been standing there untouched for 200 years, this place could use some mercy (or restoration work).  Our next stop was Santa Cruz Catholic Church (built by the Portuguese).  Finally we stopped at Wat Prayoon which had it’s own museum.  The 180 year old all white chedi was recently restored and all sorts of amulets and buddhas were found inside it’s chambers.  This is the only chedi we were able to actually go inside.  The courtyard was beautiful lined with old pieces of timber taken from the chedi’s interior during it’s restoration.  We went into the very center of the chedi admiring the secret room and then climbed up to the top for a great view. 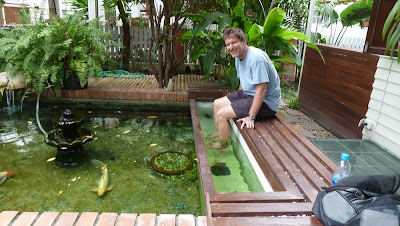 We went a little further south and eventually took another ferry back across the river and continued back to the clubhouse. Tob stopped and ordered all of us some street food which we brought back to the house and ate for lunch.  The owners had a spa fish bath on their property which Robert decided to try.  As soon as he put his feet in, the fish went after him – nibbling all over.  He started laughing saying how much it tickled.  I didn’t try it…for some reason I had images of piranhas in my head.  We talked for awhile, wrote comments on their wall and then headed back to our hotel to relax.

We loved getting to see the city this way and we’d for sure do another bike tour if we return to Bangkok.  In addition to the pictures we took, Tob also took some pictures during the tour and sent them to us.  Looking back, it’s amazing how much we saw that day…

2 thoughts on “Biking around Bangkok”