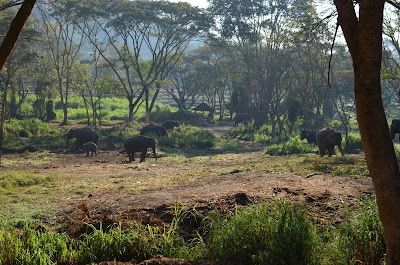 To be in the mountains and see elephants roaming around freely is in itself pretty incredible.  We had the added bonus of being there only a couple days after the newest member of the herd was born.  We got to spend time with the  3 day old baby elephant and her mother.  The baby was already walking – her legs a little wobbly and skin a little baggy.  She was still small enough to walk under her mother.  I’m not sure what she thought of all of us, but we all thought she was adorable.  Her eyes were so big, her trunk so tiny and her little hair was spiked up.  She stayed close to her mother who was obviously being protective, but she still let us feed both of them bananas.  It wasn’t very long before a 10 week old baby elephant showed up – jealously wanting all the attention (and the bananas).  There was another 10 week year old roaming around nearby, but he stayed closer to his mom.  We were told 5 elephants were born on the “farm” this year and that another one was on the way. 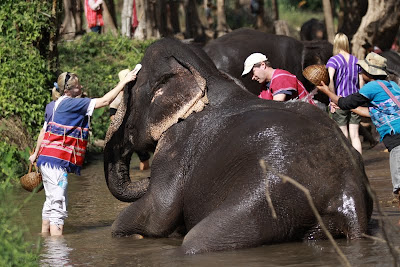 We headed across the river to a covered pavilion where the head mahout (trainer) spent about 30 minutes talking about the Thai Asian Elephants and the Patera Elephant farm.  He went over their history, their dwindling numbers, and the different parks and programs around Thailand trying to protect and increase their numbers.  He also gave us a brief run down of the day’s activities.  Meanwhile the 10 week old elephant was wondering around getting into everything, knocking things over, and bothering the chickens and roosters (which he was actually afraid of). 🙂  While he looked “small”, he was so strong that it took two full grown men to move him when he went somewhere he shouldn’t.  It was delightful entertainment.

Eventually we all put on our mahout outfits and were assigned an elephant (and their corresponding mahout).  We learned how to approach them, feed them, check their health, and to clean and bath them.  Maybodee was our elephant’s name and she was 28.  She was very calm, trusting, healthy and BIG.  She was one of the largest elephants there.  I wasn’t nearly as intimidated by her as I thought I would be though.  However, I was very much aware of her size and strength and knew she could easily crush me into a pancake if she wanted.  Like a human, she seemed to be very aware of their surroundings and looked like she was constantly watching and thinking.  Like a dog, I think she knew who she could trust.  Over time, we slowly got use to her size and I think she really liked us.  She ate two huge baskets full of food (bananas, sugar cane, and straw), we brushed the dirt off her and then took her into the river for a bath.  Bathing her in the river was hard work.  She was so big it was hard to get all of her completely clean.  After we gave her a bath… she gave us a bath. 🙂 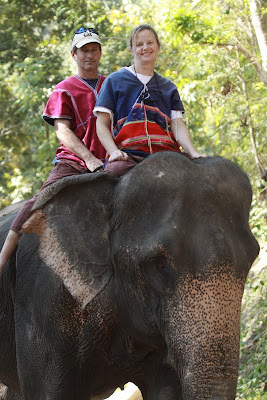 Riding to the Waterfall

We all met back at the pavilion, where we were given instructions on the commands we needed to know in order to ride our elephant.  There were quite a few, so we wrote them on our forearm for reference.  We were then shown three different ways to mount an elephant, and where to sit.  Robert & I shared an elephant so we both had to get up.  I got to ride up front while he rode on her back. It was actually pretty comfortable and not nearly as high or scary as I imagined.  Of course they are so big, it’s more like sitting in a boat than on a horse.  After we were all on, we went for about a 30 ride through the forest until we came to a spot in the river near a waterfall.  It was easy to dismount because there were some large rocks that Maybodee just went right up next too so we could get off easily.  The elephants were led away while we had a nice lunch outside on a big rock near the waterfall.  We were starving and there was all kinds of food for us to try…fried chicken, fruits, rice balls mixed with various beans/vegetables, pumpkin bread, and other goodies.

It was a much needed break, and the weather was perfect for relaxing and enjoying the outdoors.  Surprisingly, there weren’t even any bugs.  We were all sitting around chatting when the 10 week old baby decided to join our little party and finish our leftovers!  The other elephants started showing up and some got in the river.  A couple of people decided to get in the water with them, as did both of the 10 week old baby elephants.  It was so cute watching them play with each other in the water.  I’m not sure how long we were watching them, but I could have stayed all day.  Eventually, we had to leave and we all got back on our elephants – this time Robert was up front and I was in back.  The ride getting here was easy, so I took my camera out to take a few pictures.  Then I saw the hill we were about to climb and immediately put it away.  Seriously, the next 30 minutes I was in disbelief that these animals could climb and descend hills that steep…so steep that even I wouldn’t have hiked them.  We both trusted Maybodee completely, and she was amazing.  I knew she would have no problem, but the incline from where I was sitting was nearly vertical at times and I felt like I was going to slide right into Robert causing us both to fall off.  My whole body was sore for the next couple days from holding on so tightly. 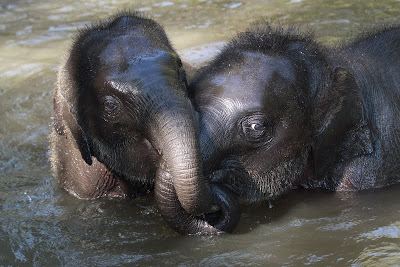 Baby Elephants Playing in the Water

Fortunately we made it back to the camp intact.  We dismounted, had some water (and Advil), and paid our dues.  We thanked our mahouts, played some more with the babies, said goodbye to our wonderful new friend, and took some final pictures before heading back to the big city.  We were exhausted but so glad we had the opportunity to do this – we wish everyone could.  They say that an elephant never forgets, well neither will we.  They truly are amazing animals and we certainly hope the world doesn’t ever lose them.

One of the staff at Patera Elephant Farms took pictures of all of us there that day and provided us with a CD.  So, in addition to our pictures you can see lots of thiers too: