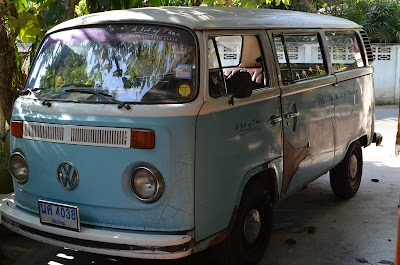 We both love food and we both love to cook but neither of us had ever been to a cooking class, so we decided to try one.  Chiang Mai must have 50+ cooking schools and it was a great way to spend the day (especially if you like Thai food).  All of the schools were rated highly on Tripadvisor, so it probably didn’t matter which one we actually chose.   In the end, it ended up being a fun and very economical way to spend the day since it went from 8am – 6pm and pretty much included breakfast, lunch and dinner.  We meet some interesting people and we also ate some of the best food we had in Thailand.  Hopefully, our newly acquired knowledge (and the included cookbook) will help us re-create these dishes when we get the urge to eat Thai food again.  The hardest part of making Thai food at home is actually locating all the ingredients that give it that uniquely Thai flavor. 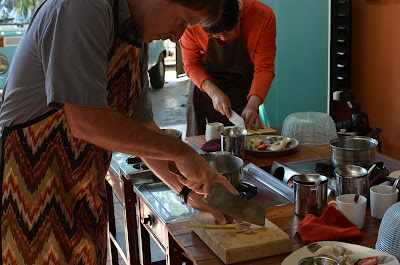 We booked our class with A Lot of Thai.  Yui has been teaching these classes for 10 years, and she only teaches 8 people at a time.  We registered for the “Popular” dishes course (which, not surprisingly, included most of our favorites).  We were told not to have breakfast, but we did anyway (there was no way we were passing up that).  Our pick-up was suppose to be at 8:30, but they were running late and didn’t get to us until 8:45.  When the van drove up, we chuckled.  We could tell right away that this was going to be interesting day.

After we picked up one other couple, we arrived at her house by 9am.  The class was actually held in her long covered patio area which was bright, tropical and very homey.  Everything was already set up for us and we each had our own cooking station.  Everyone was introduced and we put our aprons on.  Our class consisted of a couple of bee farmers from Canada, a father and daughter from South Korea, and a young couple from London (he was Indian and she was Swedish).  The first dish we all made was Chicken Pad Thai.  Yui first explained all the ingredients and then she demonstrated how to cook it.  We each got to try what she cooked and then off we went to our stations to replicate it.  As we cooked she walked around and would repeat steps outloud and correct us if we were doing anything wrong (or adjust or stoves if it was too hot/cold).  Our first dish was a success!  After we finished cooking, we’d go back to the little picnic area, eat our creations and talk.  Having lived in Chiang Mai for so long, she was a wealth of information about the city – especially the good restaurants. 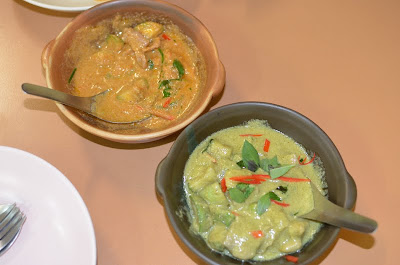 The next two dishes we made were Tom Yum Soup and Red/Green Curry.  The soup was incredibly tasty in spite of the fact that it only takes about 15 minutes to make.  There are lots of ingredients in it, but all we really ate was the shrimp and mushrooms and drank the broth.  The rest of the ingredients were mainly for flavor.  If I made it this at home, I’d probably strain the big stuff out right before serving it.

The curry dish was quite involved and had more ingredients than I thought it would.  Robert made the red curry and I made the green curry, this way we could compare.  They were both fantastic with the green curry being a bit more spicy than the red.

After cooking three of the six dishes, Yui took us to the local market.  This was great timing for several reasons.   First, it gave us a break from cooking.  Cooking is hard work, and at times stressful – especially if you are competing with your spouse.   It also gave us time to build our appetites back up.  While the serving sizes we made were very reasonable, rice, noodles, and coconut milk are filling, so a chance to walk around felt good.  Finally, it also helped us learn and remember what we saw at the market.  Since we just used many of the ingredients we could locate a lot of them on our own. The market also gave us an opportunity to purchase hard to find ingredients that we could take home with us.  Yui went over a lot more than just what we just did in class.  We meet several market vendors, had ice coffee made, watched fresh coconut being ground, and so much more! 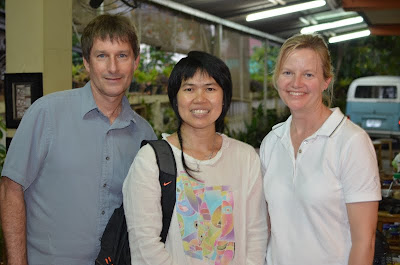 After about an hour, we headed back to the house to do our next three dishes: Chicken with Cashew nuts (yum!).  This one was pretty straight forward with no difficult ingredients, so I’m pretty sure we can do this one again.  Our fifth dish was spring rolls (which ended up very crispy – not greasy).  We usually don’t make fried food, but this one seemed pretty healthy the way it was done.  The last dish was  my complete and utter favorite – Mango with Sticky Rice.  And it was SO incredibly delicious, I thought I had died and gone to heaven.  Even without mango this dessert is so good.  I know it sounds like it would be easy to make, but I’m not sure I’ll ever be able to make it that good again.  The rice she used I’ve only ever seen in Thailand…..but I’m not going to give up, because even so-so versions of this dessert are so worth the effort.

It was 6 o’clock by the time we finished and we were all full.  No one had made plans for dinner – except us.  We had pre-arranged a meeting with friends at 7pm.  We did warn them however, that we probably would not be eating, just drinking – and that’s what we did.  What a great day!

Check out the rest of our pictures by clicking on the photo below: