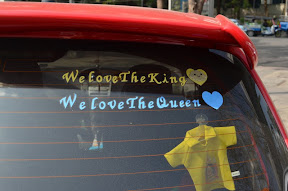 The Thais' Love Their Monarchs

I’m finally getting around to documenting our Christmas vacation trip.  It was great!  I highly recommend both Thailand and Cambodia to everyone – they are amazing countries with wonderful people.  We spent a week in Chiang Mai.  There is SO much to see and do there (hiking, biking, rafting, elephants, cooking classes, scenery, markets, food, city sights, etc.), we could have easily spent our whole vacation just there.

We had an 11am direct flight from Fukuoka to Bangkok on Thai Airlines (which, of course, left on time – I do love Japan for that).  The plane was nearly empty.  I cannot recall the last time I was on an airplane this big with so few people.  Of course the cost of flights out of Japan are ridiculously expensive so I really shouldn’t have been too surprised.  However,  it was a Friday nearing the holidays, and I really expected at least a few more people.  The same thing was true on our flight back on New Years Day.  I’m not sure how much control Thai Airlines has in the matter, but they really might want to consider lowering their prices. 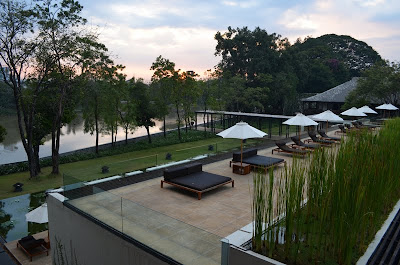 Sunrise from Our Hotel Room

Anyway, after a pleasant and uneventful 5 1/2 hour flight, we landed in Bangkok and had well over an hour to make our connection to Chiang Mai.  I must say I was quite surprised to see we had a Boeing 747 for our short 1 hour flight to Chiang Mai.  I never imagined a 747 being used for such a short domestic flight.  There are plenty of daily flights into Chiang Mai and it’s only a city with about 1 million people…could they really fill this up?  The answer is yes – and there was not one empty seat on the plane.

We arrived in Chiang Mai at 7:30pm Friday night – an hour and a half later than anticipated.  The Queen had landed right before us which pretty much shut down the airport for an hour and left us circling above the city.  The King & Queen spend their winters in Chiang Mai at their palace near Doi Suthep.  The Thai people love their King & Queen – there are huge billboards all over the city with their faces, stickers on the cars, and they all speak with such pride about them.  I was surprised to learn that King Bhumibol Adulyadej (King Rama IX) just celebrated his 85th birthday, and he is the longest reigning monarch alive – 65 years (that beats Queen Elizabeth II by 6 years). 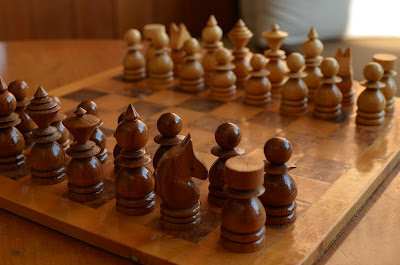 Chess Board in the Lobby

We went through immigration in Bangkok, so all we had to do when we landed, was wait for our bag, clear customs and find a taxi – which all went smoothly.  The taxi thing was a little weird because you pay them upfront at the counter, they give you a cab number and tell you to wait outside for it (which took about 5 minutes).  Mr. Dang, our taxi driver, spoke pretty good English, and he was equipped with his own business cards and plenty of information on different tours around the area.  He kindly tried to set something up with us while we made our way through the bustling city.  If I hadn’t already made so many other arrangements I probably would have, but we only had a few ‘discretionary’ days left, and I wasn’t sure what we were going to do with them.  We had his card and we told him we’d call if we decided to take him up on his offer. 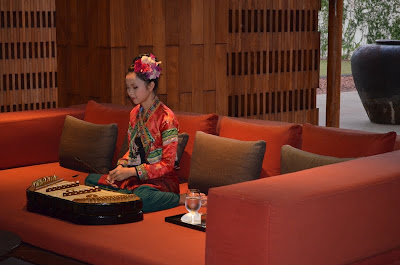 It only took 15 minutes to get to our hotel.  We knew we were going to like it right away – they sat us down with a cool drink and cold hand towel.   We filled out our information sheet while they made copies of our passports.  The architecture of the hotel (which was previously the British Embassy) was stunning – begging to be photographed.  Very Zen like and peaceful.  We couldn’t hear any noise from the city while on the premises. I’m not sure where the British Embassy is now, but I can’t believe they gave up these beautiful buildings on such a beautiful piece of property.

While we were waiting, one of the hotel staff briefed us on the resort and showed us where breakfast would be served.  We were then escorted to our room on the 3rd floor which had a great view of the river & pool below.  Our bags arrived shortly afterward and we quickly high tailed it out of there to get some dinner since we were both starving. 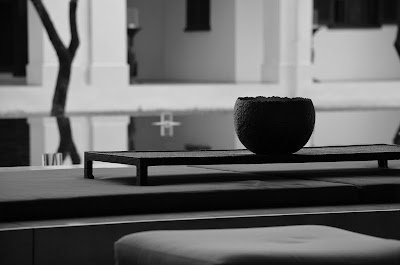 We walked across the street and found a cute restaurant called Pom’s (it’s a cooking school during the day), so we decided to give it a try.  Beers for $2, dinners for $2 and all of it was quite tasty.  Had we not had a bike outing set up for the next day, we would have stayed out much later, but we decided to forgo the night walk knowing we had plenty of nights left to see the neighborhoods.  We headed back to our hotel and fell fast asleep.

On a separate note….it seems WordPress’ latest update, doesn’t allow me to insert photos from our fotobook at the moment, so if you want to see more pictures of our incredible hotel, check out our web album on our Picassa page by clicking the image below: