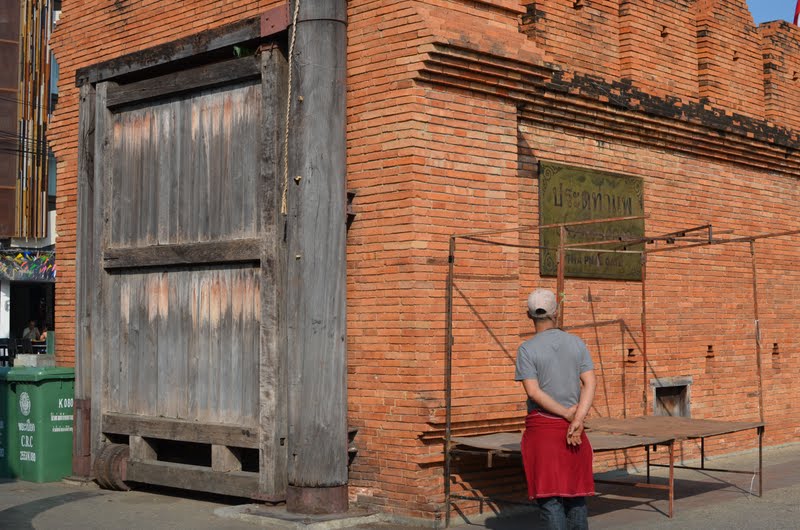 Sunday we decided to spend the day in the Old City of Chiang Mai.  The whole city of Chiang Mai has some 300+ Wats (temples), and we wanted to see some of the oldest and most popular ones.  We were a little sore from biking, so we figured walking would be a great way to loosen up our muscles.  We did take our time getting ready and enjoying another delicious breakfast though (this time I had the French toast with Strawberry cream – yum!).  We then slapped on the sunscreen and headed out.  All we had for navigating the town was a small map from the concierge.  There wasn’t much detail on it, so hopefully we’d be able to find all the places we intended to visit.

Very early on in the day we ran into a postman who was really excited to see us.  He wouldn’t stop talking about everything to see in his city.  He asked for my map and he highlighted the “must do’s” (which we already planned).  He also warned us not to go to any tailors.  We thanked him and moved on.  There were wats every couple of blocks on the main street into the city and we kept getting side tracked because each one is so interesting.  One we visited had a Donald Duck statue in it and a woman trying to sell us caged birds so we could set them free.  Chiang Mai was full of bizarre little things like that.  We eventually made it to the East Gate. 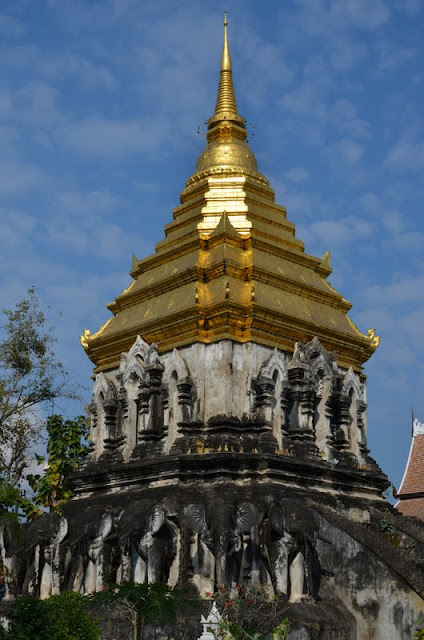 The East Gate (Thapae) is the main gate into the old city.  The old city is over 700 years old, and was once entirely surrounded by brick walls and surrounded by a moat.  In the middle of each walled side was a gate.  Parts of the wall still remain, and so does the entire moat (which is now like a park surrounding the Old City).  It’s fun to imagine what it must have been like before this big city surrounded it.  When we got inside, I almost wish we didn’t have a plan, because there were shops, cafes, restaurants, cooking schools, little alleys, and all sorts of other wonderful distractions we could have spent days exploring – oh well, maybe another time.

The first Wat we wanted to find was Wat Chiang Man, the oldest temple in Chiang Mai (built around 1270).  It served as a camp for the King while they built the city.  The wat’s grounds were pleasantly quiet and uncrowded…it felt more like a little community park.  The structures weren’t overly ornate and the buildings were simple and not very big.  The best part was the “elephant chedi” which was in the very center.  The base was constructed with the front halves of full size elephant statues all the way around.  And the murals inside the wihan (shrine hall) were also very attractive.  We saw lots of dogs and cats wondering around the grounds here as well – and people reading.  We tried to sneak out of this complex to avoid the tuk tuk driver who caught us when we first came in.  He begged us to let him take us to the wats in town, even though we told him we wanted to walk.  After a few minutes we just left, telling him we’d meet him later (which we never did).

We continued on our way through the old city to the North Gate (Puerk) – probably the most attractive entrance into the old city.  It had a set of topiary elephants to great everyone and fountains in the moats.  We then headed back to the city center.  We stopped briefly at the square in the center of the city where the Monument of the 3 Kings stands (it is devoted to the 3 Kings that were responsible for building the city).  We took a right down the main street to the west side and Wat Phra Singh.  This wat was like the “wat cathedral” –  it’s a very large complex, with lots of big buildings and it was very busy.  It’s one of the largest wats in Chiang Mai and it’s been restored several times.  While impressive in it’s size, it lacked in personality.  The highlight of this complex was Ho Trai (the temple library) and Wihan Lai Kham – because of their classic Lanna style architecture and the building details both inside and out. 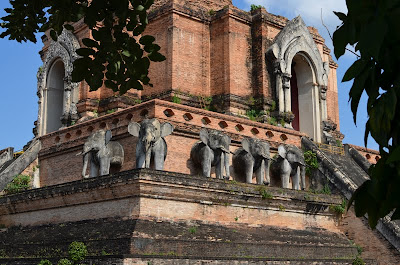 After a short break, we headed toward the West Gate (Suan Dok).  We walked all the way along the moat until we got to the South Wall.  As soon as we could see the southern gate we slowly made our way back into the city center.  We only got side tracked once (a small local wat – which was a good find).   The last wat on our list, Wat Luang was next.  Even though it was a large wat, it wasn’t busy.  We went inside and checked out the towering gold buddha and his extravagant alter and then headed out the side.  Expecting to see similar buildings as before, we weren’t prepared for the huge, beautiful, old and damaged chedi standing in front of us…what a sight!  Guess we managed to save the best for last.  The courtyard around this chedi was the main focal point of Wat Luang.  We spent a lot of time slowly going around it, relaxing on the benches in the shade admiring it’s size and details (it use to be 270 feet tall – and is slowly being restored).  There was also a huge tree near the small but very intricate city pillar.  Legend has it that as long as this tree stands, Chiang Mai will be protected.  By 2pm, it was getting warm, and we were getting tired, so we relaxed a bit before heading back to our hotel for a quick siesta. 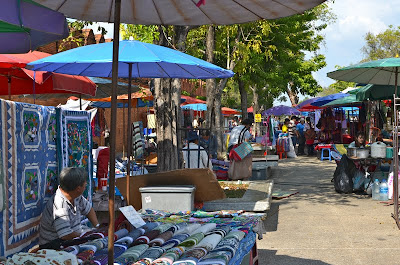 On the way back to the hotel, we noticed they were already setting up for tonight and we could tell it was going to be huge.  The famous Sunday market was tonight, and we were not going to miss it.  I’m glad we had a couple hours to rest up before it started.  We were told to get there early – to beat the crowds.

We got there about 5pm.  The traffic was horrendous – we almost couldn’t get across the street.  The market was huge.  It actually started several blocks outside the Gate…and then went on for nearly a kilometer on the inside.  It branched off down side streets and into the wats.  There were food courts, areas set up for foot message, areas for entertainment.   And the variety of arts and crafts for sale was incredible.  You have to see all the pictures to believe it.  All the food looked awesome…we snacked on a few things while we walked through it all.  We tried a soft chicken taco (thai style), some homemade vanilla ice cream, and of course, the pad thai.

We noticed that the quality of the products seemed to decline the further we went.  And, as it got darker, the crowds grew to the point where it was hard to walk as well as shop.  When things get that busy, we tend to leave, so we decided to head out of the city and down to the river to find somewhere to relax and have a nice drink and another bite to eat.  We came upon a place called Deck 1 which was new and very modern looking.  They sat us on these nice, big, soft cushions on their deck overlooking the river.  It was so nice and quiet and the mojito I had was SO good.  It ended up being exactly what we needed – and a great way to wind down our day.  🙂  All the day’s pictures are here: